Explore splendid landscapes and majestic architecture with this tour throughout Eastern Europe. Vienna’s Hofburg Palace, once of the seat of the Austro-Hungarian Empire, will astound you. Experience colloquial beauty in Budapest. Traverse the lovely hills of Krakow. Pay homage to history while touring the Castles, Cathedrals, and landscape of this important region. Poland’s capital Warsaw is sure to delight with its Gora Monastery and “Black Madonna”. Venture into Berlin’s Parliament, Opera House and Kaiser Wilhelm Memorial Church. A walking tour of Prague, with its famous Wenceslas Square, Castle of Hradcany and Astronomical Clock, will delight you. 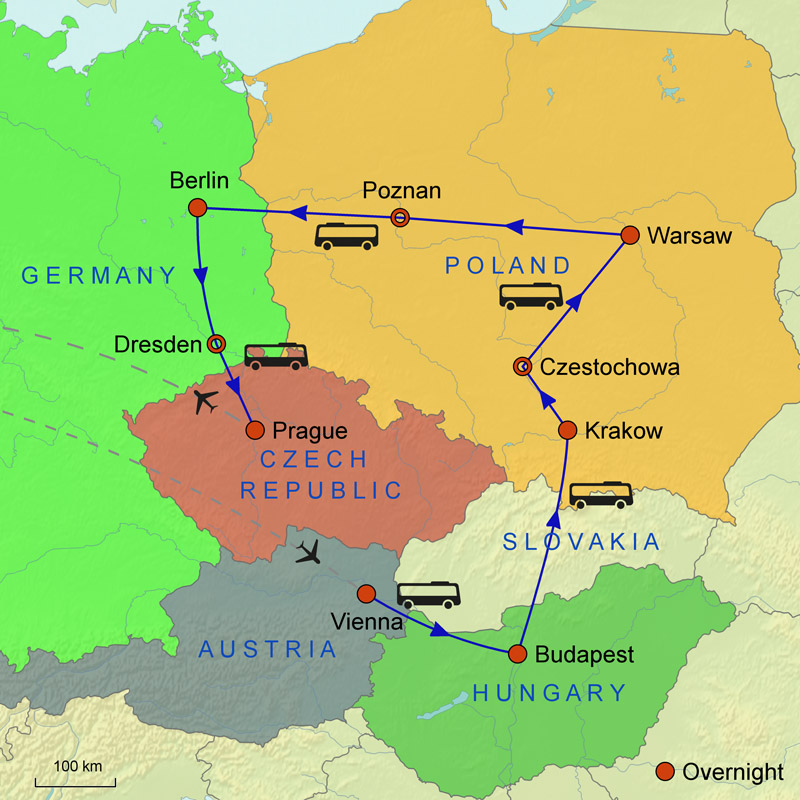 Mercure Grand Warsaw★ ★ ★ ★
On a commercial street 5 minutes' walk from the nearest tram stop, this modern hotel is 2 km from shopping and entertainment at Złote Tarasy, and Łazienki Park, a museum in a lakeside palace. Colorful rooms with contemporary decor and free Wi-Fi offer flat-screen TVs, minibars and coffeemakers, as well as en suite bathrooms with heated floors. Upgraded rooms add sitting areas. Room service is available. There's an airy international brasserie, and an intimate restaurant with a wine bar; a breakfast buffet is offered for a fee. Other amenities include a business center and meeting facilities, plus a fitness center and a sauna.

Imperial Riding School Renaissance Vienna Hotel★ ★ ★ ★
In a former military riding school dating from 1850, this polished hotel is a 2-minute walk from Wien train station and 2.4 km from the museums in the Museumsquartier. Featuring chic modern decor, the stylish rooms have minibars, free Wi-Fi and flat-screens. Club rooms include breakfast, and upgraded rooms add sitting areas, pull-out sofas, and access to a lounge with complimentary meals and snacks. Some add loft bedrooms. Room service is available 24/7. There's an elegant Austrian/American restaurant, a tavern and a lobby bar, plus a seasonal BBQ. Other amenities include a sauna and a steam room, as well as an indoor pool and a fitness room.

Novotel Berlin Am Tiergarten Hotel★ ★ ★ ★
Across the street from the Tiergarten S-Bahn station, this modern hotel is 3 km from the upscale shops and restaurants of the Kurfürstendamm. Warmly decorated rooms come with free Wi-Fi, flat-screen TVs and work desks, plus minibars, and tea and coffeemaking facilities. Suites add separate living areas. There's a relaxed Mediterranean restaurant with open-air dining, as well as a low-key bar. Other amenities include a gym, a sauna and 11 meeting rooms. Parking is available for a fee.

Mamaisson riverside Prague Hotel★ ★ ★ ★
Across the street from the Vltava River, this refined art nouveau style hotel is 9 minutes on foot from a metro station and 2 km from Old Town Square. Polished rooms with courtyard views feature minibars, free Wi-Fi and flat-screen TVs. Upgraded rooms and suites add sitting areas, city or river views, and tea and coffeemaking equipment. Some suites offer balconies. Room service is available. Breakfast is complimentary. There's a relaxed restaurant, and an elegant bar that has a lounge. Massage treatments and parking are available for a surcharge.

Prepare for the Unexpected

Homeric Tours highly recommends that all our passengers purchase travel insurance. We offer a cost-effective, comprehensive insurance plan that protects you in cases such as having to cancel your trip for medical reasons, leaving your trip early due to an emergency, getting reimbursed in case your baggage arrives late, and so on.

Additional nights in Vienna and or Prague are available upon request.
Homeric Tours will provide affordable airfare from USA in conjuction with the tour upon request.

PASSPORT/VISA: (US Passports must be valid for at least 6 months beyond your planned date of departure from United States.)
ENTRY REQUIREMENTS: (U.S. citizens entering Austria for a period of up to three months do not need a visa.)
CURRENCY: (Austria's unit of currency is the Euro. Coinage is available in denomination of 1,2,5,10,20 and 50 cents with 1 and 2 Euros. Bank notes come in units of 5,10,20,50,100,200 and 500 Euros. We suggents that you exchange your money in a bank or at an ATM, as opposed to the hotel, in order to get the best exchange rate. Banks are open from Monday, Tuesday, Wednesday, Friday: 8am to 12:30pm & 1:30pm to 3pm. Thursday: 8am to 12:30pm & 1:30pm to 5:30pm.")
CREDIT CARDS: (National and foreign Maestro cards (cash cards) are accepted. Other automated teller cards are national and foreign MasterCards, American Express cards, Visa credit cards and Diners cards, as well as the Cirrus and Visa-Plus cash cards that belong to this payment system.)

ELECTRICITY: (Voltage: 220-240 Volts (U.S./Canada are 110-120 Volts))
SHOPPING: (Stores remain open between the hours of 6:00 a.m. and 8:00 p.m. on weekdays and until 4:00 p.m. on Saturday. Closed Sunday.)
MUSEUMS: (Tuesday - Sunday: 10 a.m. - 6 p.m.)
TELEPHONES: ( Wireless Traveller offer on Homerictours.com for details.)
TIPPING: (A service charge 0f 10% is added to restaurant bill. Is is cutomary to round up bill for tip. Taxi:10% -Guides/Drivers: 15% of tour cost.)
CLIMATE: (Austria is located within a temperate climatic zone. In the west and northwest the influence of the temperate Atlantic climate is felt more strongly, in the east the influence of the continental climate. Temperatures depend largely on altitude, with averages 5C lower for each additional 300 m of elevation.)
AVERAGE TEMPERATURES: (Summer is when Vienna is at its warmest, with temperatures reach an average high of 25 degrees Celsius and a surprisingly high chance of rain when compared to the spring and autumn months, though the rain does nothing to cool the high temperature.)

CURRENCY: (The official currency of the Czech Republic is the Czech crown (koruna).The approximate value of 100 CZK is 4 EUR/5 USD.)

PASSPORT/VISA: (Your U.S. passport should be valid at least six months beyond the planned date of departure from the Schengen zone. No visa required for US citizens.)
ENTRY REQUIREMENTS: (Tourist Visa is not required for stays under 90 days.)
CURRENCY: (Germany's unit of currenty is the Euro. Coinage is available in denominations of 1,2,5,10,20 and 50 cnets with 1 and 2 Euros. Bank notes come in unites of 5,10,20,50,100,200,& 500 Euros.)
CREDIT CARDS: (Girocard is an interbank network and debit card service connecting virtually all German ATMs and banks.)
ELECTRICITY: (European 220-volt/dual-voltage.)
MUSEUMS: (Open daily 9.00  17.00)
TELEPHONES: (Wireless Traveller offer on Homerictours.com for details.)
TIPPING: (Add 5-10%, generally ending with a full Euro amount.)
TIME: (Germany is 6:0 hours ahead of USA)
CLIMATE: (Germany has a temperate climate throughout the country with warm summers and cold winters.)
AVERAGE TEMPERATURES: (The average monthly in July is 22 degrees celcius (72 degrees Fahrenheit))

PASSPORT / VISA: (U.S. Citizens may travel to Poland for up to 90 days without visa)
CURRENCY: (The Polish Zloty (PLN) is the currency of Poland. Banknotes: zl10, zl20, zl50, zl100, zl200. $1.00 USD is 3.00 PLN.)
CREDIT CARDS: (Most towns in Poland have a couple of bankomaty (ATMs), and the majority accept Visa, MasterCard, Cirrus ,Maestro cards, Amex, Diners Club, Eurocard and Access.)
CLIMATE: (Polands climate can be described as a temperateclimate with relatively cold winters and warm summers.)
AVERAGE TEMPERATURES: (The climate of Poland is maritime and sometimes continental determined by the geographical location. The average monthly temperature in July is 19 degrees Celsius (66 Fahrenheit), but sometimes in the summer the temperatures rises to 30 degrees Celsius (86 Fahrenheit). Summer is the best time to visit Poland.) 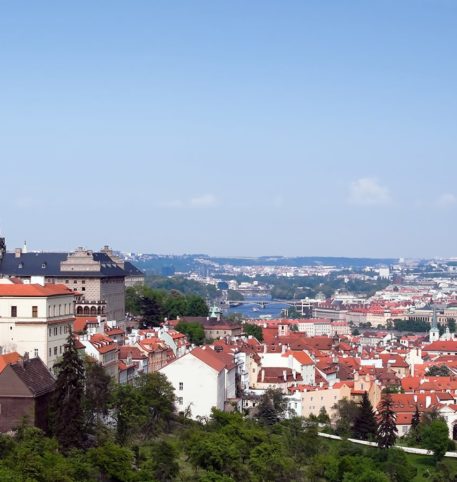 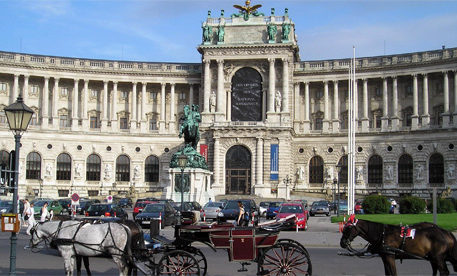